Microgreens Production with Sure to Grow Pads

Sure To Grow Storm Typhoon

Sure To Grow Storm Deluge

Short Title: Microgreens Production with Sure to Grow® Pads

Long Title: Microgreens Production with Sure to Grow® Pads

An overview of the market for microgreens and a discussion of production systems, growing media, irrigation and other considerations for growers. Adriana Gutierrez, Sure to Grow®,

WITH SURE TO GROW® PADS

Microgreens are exceptionally tender, young seedlings, which are used by “high-end” restaurants chefs for creative garnishes or flavoring. Over the past 10 years, the demand for microgreens has expanded dramatically, moving from very high end restaurants to the mainstream “white table-cloth” restaurants. They typically are grown in high density production systems with very short crop cycles of 8 to14 days.

Production is split between very large commercial growers who distribute their products through produce brokers and distributors on a regional and national scale and “boutique growers” who market directly to local restaurant customers and distributors. The growing interest in microgreens, coupled with the increasing demand for locally grown, sustainable produce has created a niche for new growers of microgreens.

In the USA microgreens are typically sold in cut form, with the seedlings typically harvested at 2” tall. They are usually packaged in plastic clamshell containers holding 4 oz. to 8 oz. With the entry of the Dutch firm Koppert Cress into the US market in 2006 there has been increased interest among chefs in “Living Microgreens”, however this is expected to be limited to a small segment of the market. 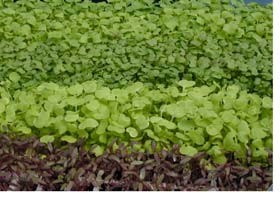 Production is split between conventional growers and hydroponic growers.

“Conventional Growers” typically grow in nursery flats or plug trays filled with peat-based soilless growing mix. Common brands of “Peat-Lite” mixes include Fafard, Promix and Sunshine Mix. Organic growers use similar mixes, often amended with compost or vermicompost. Hydroponic Growers use a variety of different media with the most common being perlite and vermiculite. Other less common media include burlap, paper towels and coco fiber. Some growers use fresh media for every batch, others clean the media between crop and re-use it.

Microgreens are an attractive crop to growers because of the high $ value potential and numerous crop turns. However this is balanced by high labor and high seed cost and a number of other issues:

SURE TO GROW® MEDIA FOR MICROGREENS PRODUCTION

With the introduction of Sure to Grow® Pads, current and prospective microgreens growers have a superior media alternative which provides significant benefits to growers, including:

MICROGREENS GROWING SYSTEMS COMPATIBLE WITH SURE TO GROW®

Sure to Grow® Pads are readily compatible with most hydroponic growing systems, in particular those utilizing Drip, Nutrient Film Technique and Flood and Drain systems. Examples of these systems include American Hydroponic’s propagation system, Crop King’s Microgreens Racks and trough systems developed by Gordon Creaser. 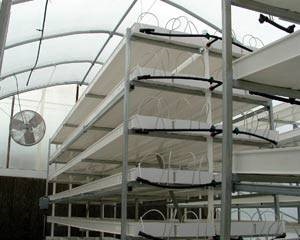 These systems characteristically include growing trays or channels and have recirculating or one-way irrigation systems, typically utilizing pumps which deliver nutrient from a central reservoir. Conversion to STG requires removal of the existing media and replacement with Sure to Grow® Pads or rolls. The irrigation might require some minor adjustments. In very hot climates some growers supplement the irrigation system with mist systems to maintain the appropriate environmental conditions, especially during the first 3 days which are critical for germination.

Growers who currently use more conventional growing systems will need to provide the following system components when setting up or converting a system to grow microgreens with Sure to Grow®:

Sub-irrigation is the recommended irrigation method for microgreens production. While it is technically feasible to water manually it is not recommended because it makes plants more susceptible to disease.

Note: some types of irrigation systems are not compatible with organic nutrients due to the build-up of filamentous bacteria.

We recently conducted preliminary testing of a new growing system for microgreens production which allows conventional growers to transition from production in soilless mixes to Sure to Grow® with a low capital investment.

*Note: Aquamat is not compatible with some organic nutrient solutions

For more information about the Sure to Grow® Aquamat Trial contact tech@suretogrow.com. For information about Aquamat go to: www.solenotextiles.com. The Modified Aquamat for Microgreens is a custom-produced product which can be fabricated in widths ranging from 3’ to 15’ wide up to the length specified by the grower. For additional information and inquiries contact: Ms. Josianne Picard, Sales and Marketing Coordinator, Solena Textile, (450) 668-2545, email: jpicard@soleno.com.

There is no “standard” nutrient in the microgreens industry in the USA. Irrigation systems vary from simple manual systems to an assortment of automated systems including nutrient injectors, irrigation booms, drip systems, nutrient film and flood and drain (or ebb and flow) systems . Nutrients used include:

Recommended Irrigation for Sure to Grow® – STG Pads are completely inert, with no starter nutrient; therefore a complete hydroponic nutrient solution is required. Conventional water soluble nutrients containing urea based nitrogen are not recommended. Organic nutrients can be used in some systems, but there are issues with fermentation and the development of filamentous bacteria which plug emitters. At this time there are no known scientific studies to determine the optimal nutrient composition for microgreens production. A common practice is to use a half-strength solution. Subirrigation is the recommended delivery system for the production of microgreens with Sure to Grow®.

Microgreens Production with Sure to Grow Pads